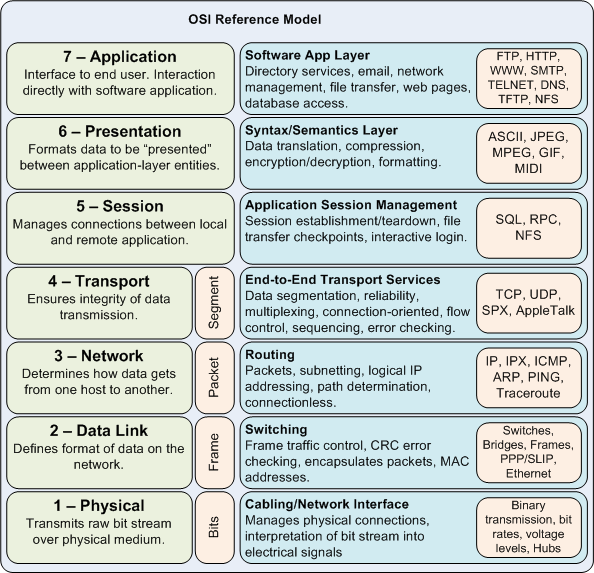 The functions of the physical layer are :

The data link layer is responsible for the node to node delivery of the message. The main function of this layer is to make sure data transfer is error free from one node to another, over the physical layer. When a packet arrives in a network, it is the responsibility of DLL to transmit it to the Host using its MAC address.
Data Link Layer is divided into two sub layers :

The packet received from Network layer is further divided into frames depending on the frame size of NIC(Network Interface Card). DLL also encapsulates Sender and Receiver’s MAC address in the header.

The Receiver’s MAC address is obtained by placing an ARP(Address Resolution Protocol) request onto the wire asking “Who has that IP address?” and the destination host will reply with its MAC address.

The functions of the data Link layer are :

Network layer works for the transmission of data from one host to the other located in different networks. It also takes care of packet routing i.e. selection of the shortest path to transmit the packet, from the number of routes available. The sender & receiver’s IP address are placed in the header by network layer.
The functions of the Network layer are :

Transport layer provides services to application layer and takes services from network layer. The data in the transport layer is referred to as Segments. It is responsible for the End to End delivery of the complete message. Transport layer also provides the acknowledgment of the successful data transmission and re-transmits the data if an error is found.
• At sender’s side:
Transport layer receives the formatted data from the upper layers, performs Segmentation and also implements Flow & Error control to ensure proper data transmission. It also adds Source and Destination port number in its header and forwards the segmented data to the Network Layer.
Note: The sender need to know the port number associated with the receiver’s application.
Generally, this destination port number is configured, either by default or manually. For example, when a web application makes a request to a web server, it typically uses port number 80, because this is the default port assigned to web applications. Many applications have default port assigned.
• At receiver’s side:
Transport Layer reads the port number from its header and forwards the Data which it has received to the respective application. It also performs sequencing and reassembling of the segmented data.

The functions of the transport layer are :

The services provided by transport layer :

This layer is responsible for establishment of connection, maintenance of sessions, authentication and also ensures security.
The functions of the session layer are :

**All the below 3 layers(including Session Layer) are integrated as a single layer in TCP/IP model as “Application Layer”.
**Implementation of these 3 layers is done by the network application itself. These are also known as Upper Layers or Software Layers.

At the very top of the OSI Reference Model stack of layers, we find Application layer which is implemented by the network applications. These applications produce the data, which has to be transferred over the network. This layer also serves as a window for the application services to access the network and for displaying the received information to the user.
Ex: Application – Browsers, Skype Messenger etc.
**Application Layer is also called as Desktop Layer.

The functions of the Application layer are :

OSI model acts as a reference model and is not implemented in Internet because of its late invention. Current model being used is the TCP/IP model.